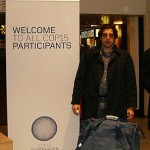 Copenhagen, Dk – December 7, 2009 – COP-15 President, Connie Hedegaard, has laid down the challenge clearly. “Climate change failure is not an option,” she declares as heads of state, NGOs and activists gather in Copenhagen this week.

Against this dramatic backdrop, a progressive NGO from Brazil is offering a significant solution. Scientists working with the STOP the Destruction of the World Project (STOP) have developed a breakthrough new motor that has been tested in ventilation, pumping, air compression and refrigeration applications – all of them saving between 50 – 90% of electricity compared to regular induction motors.

“It’s the most significant technological development since the great Serbian inventor, Nikola Tesla,” says STOP president, Claudia Bernhardt de Souza Pacheco, “and it does something he was never able to do – usher in a new era of sustainable, clean and inexpensive technology.”

Just like solar panels capture energy from the sun, the Keppe Motor captures essential or scalar energy from the “vacuum” of space, which it turns out is no vacuum at all. Traditional motors block this aspect of the energy field, which accounts for their relative inefficiency. The Keppe Motor is a cold running motor, meaning it’s more reliable and production costs are low.

The Keppe Motor also needs no oil or gas and much less electricity to run and is completely free of carbon emissions.

“It can potentially replace many types of motors, but with less strain on the environment. This makes it immediately useful for combating global warming and reducing pollution,” says Keppe business development manager, Eduardo Castelã.

As well, increases in solar flare activity are projected to continue, causing negative impact on telecommunications and worldwide electrical systems. The Keppe Motor’s technology is significantly less reliant on electricity, which will help humanity unplug from the electrical grid.