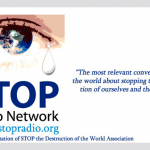 Redefining the Relationship Between Work and Capital – STOP Radio Network

It’s a philosophy deeply entrenched in our North American view of life: make your money work for you, leverage your investments, make money while you sleep.

But hidden behind these strategies is a massive trap. Money, which is supposed to be a means, has become the ends. Today, capital is more important than your mother.

Today on Thinking with Somebody Else’s Head, Redefining the Relationship Between Work and Capital.

One of my students, a Director at a large European supermarket chain, was lamenting the plight of human beings after returning from his summer vacation in Europe. “People seem lost,” he said. “They seem very far from the basics of life.”

Then he went on to make an interesting parallel. When he was a boy growing up on the French island of Martinique, he became fascinated with bee-keeping. He learned the basics from his dad, then began to branch out to develop his own bee hives. Marked by a strongly competitive nature and beset with the rivalry that commonly springs up between sons and fathers, he set out to see if he could overtake his father’s honey production. He studied and researched the latest bee breeding techniques to learn how to maximize production, do more with less, ramp up his production to steroid-high levels without increasing his investment substantially. He imported queen bees from France and America, bred them with his local product, and very shortly achieved impressive spikes in production levels.

He admits to feeling a certain power in this, a sensation that he was creating some kind of super bee that would lead the way to continuously higher quantities of honey. But his success was short-lived. Hybrid bees, it turns out, are much more fragile than natural ones. They bred quickly and produced a big jump in honey output over the short term, but were genetically weaker and more sensitive to fluctuations in environmental cycles. What’s more, their breeding cycles were totally out of sync with nature’s. Bees would breed robustly, then fly out of the hive looking for flowers to pollinate, and the flowers wouldn’t be out yet. Over the long term, my student realized, mucking around with nature had disastrous – and expensive – side effects.

In our discussion, we were making the connections between the philosophy underlying his desires to out-produce his father, and the mania in business today to produce ever increasing profits based on projections and stockholder demands rather than natural business cycles.

“If I’m to have any possibility of meeting those imposed financial goals,” he told me, “Something’s going to have to give. I’m going to have to take shortcuts somewhere – with employee relations or salary limits or even business ethics.”

So look at that dilemma. We’re all twisted up inside because of exactly this struggle. Our megalomania causes us to impose our will on natural cycles so much, bending and twisting and changing everything to fit with our “getting more for less” philosophy, that we completely screw up the greater system. And then, oh, do we suffer! Because it’s hard, sometimes impossible, to find our way back.

Wasn’t that lament exactly what Dante was articulating when he wrote, “Half-way upon the journey of our lives, I roused to find myself within a dark wood, for the straight way had been lost.”

This program based on Brazilian psychoanalyst and social scientist, Norberto Keppe‘s science of Analytical Trilogy, is an attempt to help us find the straight way again. I am always open to hearing from you about these themes. rich@richjonesvoice.com

Today, we’ll focus in on how much we’ve strayed off the path and gotten all twisted around in economics. My colleague and fellow teacher, Sofie Bergqvist, joins me today to provide some illumination provided through Keppe’s book, Work and Capital.